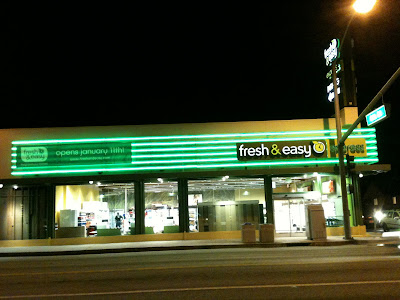 Tesco has (literally) just released (at 7 a.m in the UK) its Christmas and New Years trading statement for the six week period up to January 7, 2012.

Additionally, Tesco says total sales at Fresh & Easy grew by 40.6% (actual rate) for the period, over the previous year.

The 19.3% comparable-store-sales growth number is a strong one for Fresh & Easy.

The negative like-for-like sales for Tesco at home in the UK reflects strong competition from Walmart-owned Asda and Sainsbury's - the number two and three chains in the nation respectively after Tesco, which is number one - as well as from Morrisons and Waitrose, along with pressure being put on it from the deep-discount end by Aldi and Lidl, the German hard discount grocery chains that continue to expand in the UK.

Tesco launched a heavy discount program for the holidays called "The Big Price Drop," which, based on the sales growth numbers for the seven week period, doesn't appear to have been a sales booster for the retailer.

As we were the first publication of any kind to report on Sunday and early Monday, Tesco is closing 12 Fresh & Easy stores. The retailer plans to close the stores by the end of the month.

We will have more to say about Tesco's holiday sales report, particularly as it pertains to its Fresh 7 Easy chain in the U.S., upcoming. But the reporting is literally hot off the online press, so we wanted to give Fresh & Easy Buzz readers the first look.

You can view Tesco just-released holiday sales report here, which includes sales data for its divisions in Asia and Central Europe, along with some additional sales data overall.
Posted by Fresh & Easy Buzz at 11:15 PM

This is a random place for it, but Im writing this here because youve asked me about the downtown Fresno location before, and I was there earlier today.

1) No bakery. Same sample station, and no sign of construction. Odd, considering it's one of the few locations that opens at 7am.

2) One of my major complaints has been addressed. Almost every fridge has glass doors installed, so the cold air isnt wasted. Exceptions are the veggie area and the endcaps. A sign says the doors save 60% of their energy costs. The doors look very good, and didnt appear to fog up.

3) There were two protesters outside.

I peeked inside the unopened Bullard and Fresno location and it appears 100% ready to go in terms of registers, fridges, shelves etc. Full signage on store and on vertical sign by street.

O I'm sure because they were open for the 1st time on Thanksgiving it really helped those numbers. This co. is going away w/ what they promised their employees yrs ago.. "family comes first" then why work employees 6 day a week during the holidays and now be open on just about all holidays!?! So much for family time!!

They were open last Thanksgiving also. Not just this year. Don't kid yourself. Business comes first for any company. If they can make money by being open on the holidays, then they will be open on the holidays. If you don't like it, start your own business and dictate being closed on holidays. But, I have a feeling if you could make money by being open on a holiday you would do it. Don't be resentful/hypocritical because you are at the bottom of the money chain.

Thanks for the information James.

The Fresno store that's being closed is set to be shuttered on February 4. Having a 50% off sale there right now, in case you didn't know.