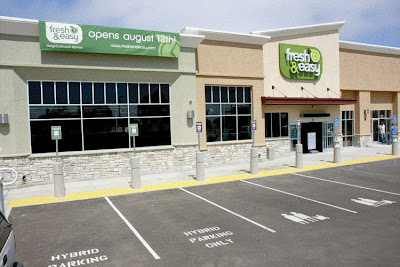 (Retail) anchor away: A brand new retail shopping center, the Yucaipa Oak Retail Center in Yucaipa, California, which features a new, built from the ground up Fresh & Easy Neighborhood Market grocery store as its retail anchor, is nearly completed, reports the Redlands Daily Facts newspaper based in Redlands, which is located near Yucaipa.
The new shopping center, where construction began on November, 2007, is expected to open on about September 5. Read the full report here.
In addition to the Tesco Fresh & Easy grocery store, which is about 13,000 -to- 14,000 square feet, a Firestone Complete Auto Care Center is going in the shopping center. Additionally, there is an 8,000 square foot building designed to have smaller retail stores and medical and professional offices in it in the shopping center.
Unlike the majority of the Fresh & Easy grocery markets currently open in Southern California, Nevada and Arizona, which are in remodeled buildings that formerly had retail stores in them, the new Yucaipa store is built from the ground up using Tesco's Fresh & Easy Neighborhood Market's new store prototype design. These built from the ground up stores are much more attractive and functional (which doesn't take much with all due resepct) than the stores in the remodeled buildings, including having many more windows, along with skylights that let natural light into the store's interior.
The store pictured at the top of the page is one of Tesco's Fresh & Easy prototype design stores. The particular store pictured is in the Point Loma neighborhood in San Diego, California. It's scheduled to open on August 13.

Tesco is opening, and plans to open, more of these built from the ground up stores, including having them serve as the primary retail anchor in shopping centers similar to the Yucaipa Oak Retail Center.
Another store opening, another protest: Fresh & Easy Buzz has been extensively covering the UFCW union's campaign to get Tesco officials to meet with leaders of the retail supermarket clerks' union to discuss unionizing its Fresh & Easy grocery stores, as regular readers are aware--and as a search typing in UFCW on the blog search box at the top will bring you stories about.
Yesterday we wrote here about a protest of a Fresh & Easy store grand opening by the Pico Rivera, California City Council, and the pro-union message that city's mayor gave to Tesco Fresh & Easy Neighborhood Market executives when he attended the grand opening of the retailer's first store in the Southern California city.
This morning, Tesco held a grand opening for a new store in the Southern California city of Hisperia. In addition to the store's employees, Tesco Fresh & Easy Neighborhood Market executives, members of the media and customers attending this morning's festivities, about a dozen protesters supporting the UFCW union also were at the grand opening, according to a report in the Hisperia Star, the city's daily newspaper. Read the report here.
According to the story, it appears the protesters didn't stop a crowd from attending the grand opening, in search of freebies and discounts. That doesn't surprise Fresh & Easy Buzz, since in this poor economy finding food bargains tends to trump concerns over issues like labor relations and unionization by a significant factor for most consumers. Of course, some would argue the two issues are rather closely related. Others say: bring on the freebies and bargains.
Mule's plan gets an 'ass' kicking, Fresh & Easy's gets a positive nod: Curious? Click here to learn more.
Las Vegas, Nevada Metro Market
A new $50 million, 86,000-square-foot shopping center is nearing completion in the southwest valley in the Las Vegas Metropolitan region, adjacent to the Southern Hills Hospital. The five-building project is being developed by Longford Properties, a 17-year-old Las Vegas-based commercial builder. Longford Shoppes at Southern Hills will debut in October at Fort Apache and Sunset roads, reports the Las Vegas Business Press, a business publication based in the city.
The 10-acre complex is anchored by a Tesco Fresh & Easy Neighborhood Market grocery store and a Walgreens drugstore, which together occupy 30,000 square feet. The Fresh & Easy store is 13,000 -to- 14,000 square feet. Other announced tenants include Subway, Moxie Java Bistro and Planet Wings, among others. The center is reportedly 45 percent pre-leased.
Read the full story from the Las Vegas Business Press here.
The new Fresh & Easy grocery store in the new center is a built from the ground up store like the one in Yucaipa, California. As we mentioned in that item at the very top of the page, Tesco is making a strong effort to build and more of these built from the ground up stores, making them the food and grocery retailing anchors in various shopping centers like this one in Las Vegas and the one in Yucaipa.
Doing so demonstrates in our analysis Tesco's long-term commitment to the three markets it's currently in. It's one thing to put stores in remodeled empty retail buildings that a retailer can get on the cheap, it's another to make major investments to anchor shopping centers with brand new, built from the ground up stores like Tesco is increasingly doing. Doing so demonstrates long term commitment.
Phoenix, Arizona Metro Market
For about three decades downtown Phoenix, Arizona, like the down towns of numerous cities throughout the U.S., has been hungry for a supermarket that offers a decent selection of groceries and fresh foods at a reasonable price.
It's about to get one, possibly a second--and recently got a Fresh & Easy Neighborhood Market not too far from the city's downtown core.
Read this story in today's Arizona Republic newspaper to learn more about the developments, including the soon to be open small-format 9,000 square foot Bashas-owned A.J.'s Fine Foods store in downtown Phoenix.
Fresh & Easy Buzz has predicted for sometime one of the next top trends in food retailing and in community planning will be the location of numerous small-format grocery stores of various types in city downtowns across the U.S.
The Arizona Republic piece discusses this as well. We predict, and will continue to report on and write about, this urban small-format grocery store trend will continue to develop, then really accelerate beginning early next year.
Upcoming New Markets: Sacramento in Northern California
Tesco Fresh & Easy Dissent Building in Sacramento's Oak Park Neighborhood: From the Midtown Grid, (reprinted below) a blog covering Sacramento's low-income, Oak Park neighborhood, which is underserved by supermarkets, where as we've reported and written about extensively, Tesco plans to open a Fresh & Easy Neighborhood Market grocery store next year.
Suburban Meteor Lands on Oak Park Forming a Crater Instead of an Intended Walkable Grocery Store: The Story of Fresh & Hard Instead of Fresh & Easy
by Grid Guru
Thursday 31 of July, 2008