Royal Hands Across the Atlantic: The Buzz is Caroline Kennedy Could Become the Next U.S. Ambassador to Britain 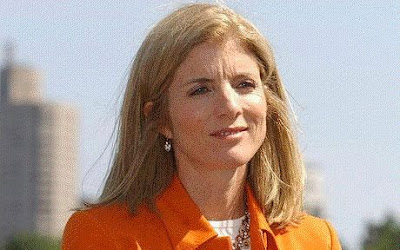 The United Kingdom and the United States go back a long way. The U.S. once was a colony of Great Britain of course. The two nations fought as allies in two wars, World War I and World War II. And, each has been the others chief trading partner for decades. That both countries share the English language in common is a very important contributor to the special relationship the two nations have as well.
As a result of this shared history, the U.S. and the UK have come to share what is called "the special relationship," essentially that each is the others "best friend" when it comes to world affairs, along with other economic, cultural and social aspects.
Mandrake (aka Tim Walker), a writer for the UK's Daily Telegraph newspaper, is reporting this morning that "the special relationship" between the two English-speaking nations could become much more special (our interpretation not his) if presumptive Democratic candidate for U.S. President Barack Obama is elected this coming November.
The enhancement of "the special relationship" doesn't so much have anything to do with what Mr. Obama might do vis-a-vis the UK if elected President. Rather it has to do with a key decision he might make if elected.
That decision, according to the Telegraph's Tim Walker, will be to name America's sweetheart, the beloved Caroline Kennedy, the only living child of former President John F. Kennedy and former first lady Jackie Kennedy, to be the U.S. Ambassador to Britain's Court of St. James. In other words, if elected, Barack Obama plans to name Caroline Kennedy the United States Ambassador to Britain, according to the Telegraph.
Read Tim Walker's report in the UK Telegraph here.
We agree with Tim Walker's report that if elected Mr. Obama is likley to name Caroline Kennedy, who is one of two people in charge of Senator Obama's Vice Presidential selection committee, as the U.S. Ambassador to Britain.
Doing so makes strong sense for three key reasons:
First, Caroline Kennedy is a major backer of Senator Obama's campaign for President. It was Caroline in fact who played a major role in getting Democratic Party stalwart and liberal lion uncle Teddy Kennedy to come out in support of Obama for his party's nomination for President.
Senator Ted Kennedy served as a second father to Caroline since her own father was killed when she was just a child. Barack Obama is the first and only Presidential candidate Caroline Kennedy has publicly supported other than her Uncle Ted Kennedy, who ran for the Democratic party nomination in the 1980, challenging and losing to incumbent President to Jimmy Carter. Senator Ted Kennedy is currently fighting for his life with brain cancer.
Second, Caroline's grandfather, the late Joseph P. Kennedy, the man who built the Kennedy family political dynasty, served as the U.S. Ambassador to Britain under the Presidency of Franklin Roosevelt (FDR), whom most historians consider to be the greatest American President in history, along with Abraham Lincoln.
Joe Kennedy, who disagreed with President Roosevelt about having the United States enter in World War II as allies to the British, was recalled by FDR from his post in the UK over the disagreement. However, ever the political animal, Joe Kennedy still supported President Roosevelt in the following Presidential election, which FDR won, and in the 1960's went on to see his own son, John F. Kennedy, become President of the United States.
Lastly, Caroline Kennedy, age 50, and her husband Edwin Schlossberg, an industrial designer by profession, have lived in London in the past, and enjoyed it greatly.
Having a Kennedy representing the United States in Britain once again is likely to create much across the pond excitement, since the Kennedy family has always been the closet thing to royalty the United States has ever had.
When her grandfather Joe Kennedy moved to England as Ambassador to the Court of St. James during the Roosevelt administration, his large, young family took the UK by storm.
If Barack Obama is elected this November and does name Caroline Kennedy as U.S. Ambassador to Britain, it would be a stroke of genius. Ms. Kennedy is smart, savvy and polished, yet extremely down to earth.
She also understands "the special relationship" between Britain and the U.S. probably better than anyone else who could be named Ambassador.
After all, her grandfather's biggest mistake in an otherwise highly successful lifetime, was that he opposed the United States' going to war against Adolph Hitler, suggesting the dictator could be reasoned with, and that negotiation with him could bring peace.
Fortunately for the free world, particularly for Europe, the great Winston Churchill and Franklin Roosevelt disagreed with the Ambassador. The United States entered World War II as allies against the brave British, taking Hitler head on. The allies ultimately prevailed, thanks to the dedication and sacrifices of so many brave men and woman. And out of the ashes of World War II, the special relationship between America and Britain was forged.
We suspect Carolyn Kennedy could invigorate that special relationship, which has become a bit tarnished of late at least politically, should Barack Obama get elected President this November. We also believe Ms. Kennedy would be very aggressive in expanding economic and cultural ties even more so than they already are between the two nations. She has corporate, political and cultural connections and relationships in both the U.S. and UK, which could be used for the mutual benefits of both countries and its peoples.
In fact, should Republican candidate John McCain get elected instead of Obama, he could do much worse than to name Ms. Kennedy the U.S. Ambassador to Britain himself.
Posted by Fresh & Easy Buzz at 1:29 PM