Or perhaps the nearly half-million dollars could have been used to buy space on many more outdoor advertising billboards and additional radio advertising time, in order to create added awareness of and increased sales for the fledgling grocery chain, which has its stores in California, metro Las Vegas, Nevada and Arizona.

Or maybe on a more practical note, particularly since Fresh & Easy lost $112 million in Tesco's fiscal half-year ended August 27, the grocer could have used the $489, 747,73 to pay the wages and health care benefits of around 25 of its store-level employees, each making $10 hour and working an average of 30-hours a week, for an entire year. Each Fresh & Easy store employs about 25 part-time workers.

But neither of the three potential and logical uses for the $489,747,73 in question is an option.

Instead, Fresh & Easy Neighborhood Market recently paid the nearly half-million dollars to a former employee named Kyle Weathersby, who worked as a meat buyer for the Tesco-owned El Segundo, California-based chain until he was fired in 2008.

Weathersby, who lives in Southern California, was accused by senior management at Fresh & Easy of stealing meat, which was the stated reason for his termination.

Category managers and buyers at Fresh & Easy were also told by a member of the grocery chain's senior management team about Weathersby's firing, and the reason for it, which is something not generally done when dealing with sensitive human resource matters of such a nature.

We know this to be the case because we first learned about Mr. Weathersby, his firing and the meat issue shortly after it happened over four years ago, as did many of the employees who work at Fresh & Easy's corporate headquarters in Southern California.

According to our research, no criminal charges were ever filed against Weathersby, based on the meat theft accusation.

Glick has extensive trial experience in employee rights and wrongful termination law, having won numerous cases for his clients against former employers, including grocery chains such as Kroger-owned Ralphs, Albertsons and the former Wild Oats natural foods chain, which was acquired by Whole Foods Market in 2007. He's also been involved in a number of high-profile employment-related class action lawsuits in California and on the federal level.

On June 10 of this year a Los Angeles County Superior Court Judge issued a judgment against Fresh & Easy Neighborhood Market for $489,747.73, awarding that amount to former Fresh & Easy meat buyer Kyle Weathersby, giving him and his attorney a victory in the lawsuit, which was filed in 2008 and in court for over four years.

This story hasn't been reported elsewhere, until now here in Fresh & Easy Buzz.

But in the end the ex-meat buyer and his lawyer, who shares in the big cash award, won their case.

It took Weathersby a while following the judgment to get his check however - slightly over three months to be precise.

But in September, following a number of actions taken by lawyer Glick - culminating in a mid-August visit to the Fresh & Easy store in Pasadena, California accompanied by some Los Angeles County Sheriff's deputies armed with a writ of execution - Fresh & Easy Neighborhood Market paid the judgment amount due to the Los Angeles County Treasury Department, which in turn issued a check for $489,747.73, dated September 14, 2011 (pictured at the end of this story), to Kyle Weathersby's attorney, Stephen Glick.

Attorney Glick, after taking his cut of the winnings, forwarded on the bulk of the $489,747.73 to former Fresh & Easy meat buyer Kyle Weathersby.

If you add in the legal costs spent by Fresh & Easy Neighborhood Market to defend against the lawsuit, the financial loss to Tesco far exceeds the $489,747.73 paid out to the former employee who won his lawsuit against the grocery chain. Legal fees to defend against a lawsuit in Los Angeles Superior Court for four years don't come cheap for a grocery chain. They hurt even more when you lose the case.

Were we in Tesco CEO Philip Clarke shoes, who in 2008 was busy running the United Kingdom-based global retailer's corporate information technology department and retail operations in Europe and Asia, we would be asking numerous questions about how the termination was handled in 2008 by Fresh & Easy Neighborhood Market's senior management.

After all, Fresh & Easy Neighborhood Market, which has lost around $1 billion since the first stores were opened in November 2007, could have used the nearly half-million dollars to pay for the six or seven in-store bakery additions, to buy outdoor advertising and radio spots, or to pay the wages of the 25 or so store-level employees for an entire year, instead of spending it on lawyers and legal judgments.

Doing so - breaking even at Fresh & Easy in 16 months - is now going to be around a million dollars more difficult for Clarke, Tesco and Fresh & Easy's thousands of employees to achieve, as a result of the $489, 747.73 judgement and associated lawyer fees and legal costs.

[Click on the facsimile of the check and check stub (below) from Los Angeles County, via Tesco's Fresh & Easy Neighborhood Market, to Kyle Weathersby's attorney, to enlarge it.] 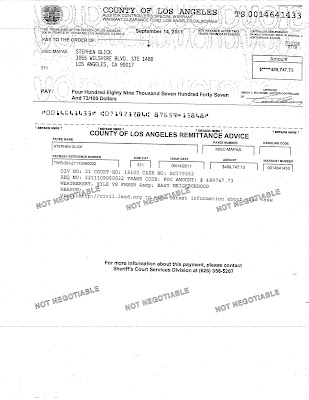 These days, a million is not a lot of money. A half-million is even less. A big... "MEOW" to you.

A million here, a million there ... Pretty soon you're talking real money.

To the poet of the first comment... Why not try and clean up your shoddy business practices and crummy treatment of employees rather than spend such an amplitude of money and time on justifying them?! By no means does your organization practice what it preaches! You have no respect for this country or its citizens, what goes around, comes around!

While there is no defense to employers breaking the law with their employees (or vice versa), many guilty people win 'innocence' (and large reparation rewards)on technicalities (talk to any attorney). It would be interesting to know all the facts. It was implied that there was as much, or more, harm in the employer sharing the story of the termination with other employees, to make one think that this was their 'undoing.'

Be it discrimination, wrongful termination, or breech of confidentiality, they were out of line. I BEG of you Fresh & Easy Buzz blog, do some deeper digging in to this company and you WILL uncover disgusting business practices, felonious loss prevention tactics, and executive conflicts of interest that make Enron look like the Mickey Mouse Club!