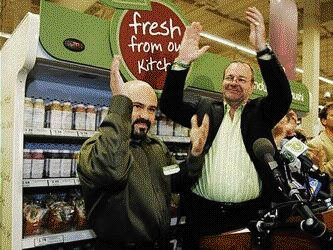 Fresh & Easy CEO Tim Mason (right) recently sold ~1.3 million worth of Tesco stock.
Wall Street's Piper Jaffray is the first U.S. or international investment firm to report what we have been writing about here for a number of weeks: That Tesco's Fresh & Easy Neighborhood Market small-format, convenience-oriented grocery store chain in the Western U.S. is in trouble.
The United Kingdom-based business publication, thisismoney.uk.co was the first to report the Piper Jaffray research, which confirms what we have been reporting on and analyzing from our sources, in this morning's addition.
Piper Jaffray's Mike Dennis says, based on "in-depth research" the firm has conducted, that "weekly Fresh & Easy store sales are far short of target and the stores need an urgent overhaul."
"The Fresh & Easy concept is not right and they need to quickly find out what the issues are and reset the concept," Dennis says.
Dennis claims the 50 Fresh & Easy stores opened to date are averaging about $170,000 a week. Further, he believes Tesco was aiming for sales of at least $200,000 a week at this point in time, with an eventual target of $270,000 a week in gross sales.
Ironically, Piper Jaffray's $170,000 a week is far higher than what our sources have told us is the case. (These are multiple sources, and we averaged and double-checked the sales numbers each has provided to us.) As we reported last week, our sources have been telling us Fresh & Easy store sales are averaging more like $60,000 -to- $100,000 overall, with just a few doing higher weekly sales.
Jim Prevor, who publishes the Perishable Pundit online newsletter, and who has also been doing extensive writing and analysis about Tesco's Fresh & Easy Neighborhood Market operations like we have, pegs the fledgling 50-store chain's weekly sales even lower--at about $50,000 -to- $60,000 per week average.
A Tesco spokesman told thisismoney.uk.com that Piper Jaffray's Mike Dennis didn't speak to him, or to his knowledge spoke to any other Fresh & Easy USA executives, prior to releasing the report. However, this isn't an uncommon practice for Wall Street investment firms when researching a company--especially a start up. After all, the likelihood the company would confirm negative performance indicators turned up in research isn't extremely probable, especially if that company's parent firm is a multi-national public company. Such confirmations can cause dramatic overnight drops in stock-share value (and thus in corporate value), something the parent company and its major stockholders aren't going to approve of.
The investment firm's analysis--which comes on the heels of what analysts and writers like us and Prevor have been discussing--will likely spur other investment houses in the U.S and UK to begin researching Tesco's performance with its Fresh & Easy chain in the U.S. more closely.
Meanwhile, if Piper Jaffray's weekly sales averages are correct (we think they are too high), then in our analysis Tesco's prospects for success with its Fresh & Easy chain is actually higher than we previously believed it to be, based on the $70,000 -to- $100,000 a week average sales numbers our sources have provided to us.
We are continuing to work this story, and will have additional reporting and analysis coming up on Fresh & Easy's performance soon, as a follow up to this piece. In the meantime, we suggest you read thisismoney.uk.co's full story from this morning's edition here.
thisismoney.uk.co also reported in the story that Tesco Fresh & Easy Neighborhood Market CEO Time Mason recently sold ~1.3 million worth of Tesco stock shares. They may or may not have something to do with Fresh & Easy's current performance. We will be asking Mr. Mason that question in an upcoming email.
Note: Read our February 21 piece, "A Look at Fresh & Easy at 50 (Stores): An Analysis and Some suggestions for Going Forward."
Posted by Fresh & Easy Buzz at 12:44 PM