David Woodfill, a staff writer for the Tribune, a daily newspaper in Metropolitan Phoenix, Arizona's East Valley region, has a story today about the four Wal-Mart Marketside small-format combination fresh foods and grocery stores being built in the market. All four of the stores are located very close to Tesco Fresh & Easy stores, as we mentioned in our piece yesterday.

Since the Tribune's piece today touches on many of the themes we explored in our analysis yesterday, along with providing some local market feel, we wanted to bring it to our readers. Below is the story: 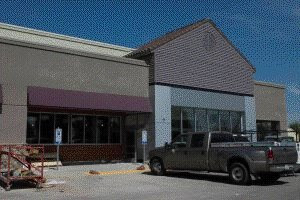 The three-mile stretch of Elliot Road in Gilbert and Chandler may look like any other suburban thoroughfare in the Valley. But the street's a battlefield where two global grocers are about to pick a fight.

In one corner, at Elliot and Cooper Road in Gilbert, is the world's No. 1 grocery retailer, Wal-Mart Stores, which is about to unveil its newest grocery store concept - Marketside. Click to view the locations of the new stores.

Company leaders plan to open the store in the fall, along with three other locations in Chandler, Tempe and Mesa. The stores are a pilot for the United States.

In the other corner, at Alma School Road and Elliot in Chandler, is United Kingdom-based Tesco's Fresh & Easy Neighborhood Market. The retailer debuted in the Valley late last year and just celebrated the opening of its 20th Arizona store. 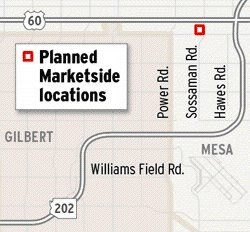 Marketside and Fresh & Easy are roughly comparable in size, about the same as two Circle K stores. Both aim to provide fast in-and-out service, and both will be selling fresh, low-priced groceries. The outcome of the face-off may decide which will dominate the growing neighborhood-centric grocery store market in the area, and eventually the nation, experts say.

"Supermarket (companies) all over the country are watching Arizona with bated breath," said Jim Prevor, an industry analyst and editor of the PerishablePundit.com, an online forum for analysis and discussion of grocery industry issues.

Also reportedly soon joining the small-market fracas is Safeway, which operates a similar test store in California called the Market by Vons.

"What Safeway and Wal-Mart and Tesco and many other people are really experimenting with is whether this small-store concept can work," Prevor said. "There's really a question about whether (they are) able to provide the kind of assortment that consumers want."

Representatives of Fresh & Easy and Marketside are reluctant to discuss the competition and play down any rivalry between them.

"Obviously we watch the market regardless of who's entering it," said Brendan Wonnacott, Fresh & Easy spokesman.

Amy Wyatt-Moore, Marketside spokeswoman, said, "We'll leave comparisons to you when the stores open this fall."

The companies have a history of butting heads in the United Kingdom, where Wal-Mart's subsidiary, ASDA, is No. 2 behind Tesco, said Mark Barratt, a native of England and an assistant professor of supply chain management at Arizona State University's W.P. Carey School of Business.

Despite the official line, experts say both companies are likely watching each other closely in Arizona.

"I can't imagine going into business and not having any idea what other people offer," said Lorri Griffith, editor of a Gainesville, Ga.-based industry publication called The Shelby Journal. "I think you have to know what you're up against."

In late 2006, Tesco began acquiring property in the Valley after the company conducted extensive consumer-polling research using a secret prototype store in California.

A year later, the firm opened its first locations, introducing local consumers, as well as those in Las Vegas and parts of California, to its idea of convenience-based miniature grocery stores, to which Europeans have been accustomed for years.

But it was overambitious, and the company didn't reached the goal until last month. The reaction to Fresh & Easy among industry observers is mixed, and some analysts say stores are running far behind the firm's original $200,000-a-week per store sales projections.

"Initially, we found that their sales were actually running around $50,000 a week," Prevor said.

Prevor noted, however, that the company has since pulled the number up by offering discounts on select items. Unfortunately, they've cut prices so much, they're losing more money than ever, he said.

Few deny that Fresh & Easy has a shot at a successful future. For example, the London-based research and analysis firm, TNS Retail Forward, predicted that the chain will become one of the top 10 supermarkets in the nation with $10 billion in sales by 2015.

New kid on the block

Wal-Mart is pursuing a different strategy than Tesco to gauge consumers' response to its stores.

While Fresh & Easy tested its concept and products under a veil of secrecy, Wal-Mart is jumping headfirst in the East Valley with four locations.

"Marketside is a smaller neighborhood market, providing customers convenient access to fresh, high-quality food," said Wyatt-Moore in a written statement. "The stores will range in size from 10,000 to 15,000 square feet and carry everyday favorites, fresh ingredients and a wide selection of affordable meal solutions."

Prevor said he's eager to see what the company will do with the concept.

"Wal-Mart is going to have a very intriguing product that I think is more likely to be successful with Americans because they know Americans better," he said.

"However, Tesco has a more dying need to succeed than Wal-Mart does. They really would like to diversify their sales into the largest market in the world. It would help their stock price a great deal. It's quite likely that even if there are big obstacles, they'll keep investing and keep trying to transform ... and not give up."

Wal-Mart, on the other hand, doesn't have as much at risk, Prevor added.

"I don't know that it matters as much to Wal-Mart," he said, noting that the company already has a similar, but larger, neighborhood stores called Wal-Mart Neighborhood Markets.

"They've opened a few of those and are gradually growing the chain, but basically Wal-Mart found that they can earn a higher return on investment by building more super centers," he said. "They may just find bigger fish to fry."

Industry watchers don't know how long it will take to determine if the small-store concept will become an entrenched part of American consumers' shopping habits.

However, a recent report by TNS Retail showed that two-thirds of consumers polled are ready and willing to try out small food stores.

Wal-Mart and Tesco both have access to massive amounts of capital. Those war chests will be handy, allowing the retailers to keep doors open while bleeding revenue, experts say.

"The most likely result ... is that it will turn out that Americans, in fact, like all their existing retailers and this will be a tiny niche that will wind up being 2 or 3 percent of the (market)," Prevor said.

Whatever happens, both companies have their work cut out because they both face hurdles, Barratt said.

For example, Wal-Mart is accustomed to competing on price alone, whereas Tesco ranks higher in peoples' opinions for service and product quality.

"It's not just about price," he said. "You can go and buy convenience food and it's pretty disgusting. Fresh & Easy's idea is good value, good quality products ... in a service-friendly environment."

Fresh & Easy's greatest challenge is that it's an unfamiliar brand owned by a foreign company.

"When they find out it's British, there's negative connotations" from consumers who don't want to support foreign companies, Barratt said.