Today's LA Times on Fresh & Easy: We Chime-In With Some Analysis and Thoughts as Well 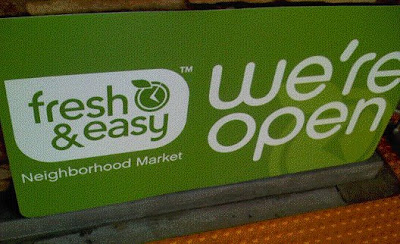 Today's edition of the Los Angeles Times has an article in the Business section by reporter Jerry Hirsch about Tesco's Fresh & Easy Neighborhood Market. The story reports on the grocery chain's decision to call a "pause" in new store openings for the next three months, as we reported on last Saturday, March 29 in the piece linked here.
The LA Times piece by Mr. Hirsch uses the three-month new store opening moratorium as its point of reference in writing about Fresh & Easy's sales performance to date at the 59 small-format, hybrid basic grocery/fresh foods grocery markets the grocer currently has open in Southern California, the Phoenix, Arizona Metropolitan/East Valley region, and the Las Vegas, Nevada Metro area.
[Even though Fresh & Easy has called a three month "pause" in new store openings, it's not a complete freeze, as there still remain a couple stores in the pipeline set to open soon.
Specifically, two stores are set to open in the next couple weeks, which will bring the total store count to 61 by the end of April.]
The Times' piece has some good shopper reaction quotes about the small-format Fresh & Easy grocery stores. The article also covers a number of issues we've reported on, discussed and analyzed on Fresh & Easy Buzz before.
Among those issues are Tesco's environmental impact problems at its massive 850,000 square foot distribution center in Southern California.
Additionally, the Times' story mentions what we've called Tesco's "ethnocentrism" (Hirsch uses the word arrogant) and its lack of local knowledge of (and respect for from a merchandising standpoint) the demographics, history and customs of the neighborhoods it has its stores in.
The Times' piece also touches on what we're referred to as a failure to either understand or implement (or both) various practices and merchandising elements common in Western U.S. grocery retailing. Chief among them, which we often point out, is "localism" in marketing and merchandising. [Review our archives for various format, operations, marketing and merchandising suggestions we've offered Tesco Fresh & Easy thus far.]
As our readers know, we were one of the first analysts to offer an estimate--based on interviews with our multiple sources--of Fresh & Easy store average weekly sales. Based on our analysis, we've estimated average overall sales at the Fresh & Easy grocery markets open to date is in the range of $60,000 -to- $100,00 per-store, per-week.
We offered our estimate at least a week before the Piper-Jaffray investment firm's London office released a report in which it said at the time it estimated Fresh & Easy average sales to be about $170,000 per-store-per-week, which the broker said was about $30,000 below Tesco's sales targets of $200,000 per-store, per-week for the markets. [We agree with Piper-Jaffray that the $200,000 per-store, per-week is about correct in terms of Tesco's internal sales goal.)
Another analyst, fresh foods industry consultant, publisher and writer Jim Prevor, released his weekly sales estimates at about the same time we published ours. Mr. Prevor's estimates are that the Fresh & Easy stores are doing about $50,000 -to- $60,000 per-store, per-week in average sales.
As we've wrote since we offered our weekly sales estimates, we stand by our numbers of average, overall Fresh & Easy weekly store sales in the range of $60,000 -to- $100,000. Additionally, we're rather skeptical of any sales estimates that don't use a range. Our sources are good, and unless another analyst is getting their estimate numbers directly from the CFO at Tesco Fresh & Easy Neighborhood Market, we suggest our readers be skeptical of any publishing of precise sales numbers, rather than a range.
Today's LA Times story quotes the Piper Jeffrey sales numbers in it. However, the Fresh & Easy sales estimate numbers it quotes (which in absolutely no knock on reporter Hirsch) are the second set of numbers Piper-Jaffray has released. Further, these new Piper-Jaffray numbers are very different (much lower) than its initial $170,000 per-store, per-week estimate just a little over a month ago.
Piper Jaffray's latest estimate is that the Fresh & Easy stores are doing about $60,000 (a similar number to Mr. Prevor's) per-store, per-week. This is a whopping $110,000 difference, compared to the first set of the brokerage firm's sales estimate numbers. It's closer to what we believe are the real average sales numbers though: the $60,000 -to- $100,000 per-store, per-week, which as we've said we currently stick by.
We do agree with much of what Piper-Jaffray says in its analysis however regarding the Fresh & Easy grocery stores' under-performance to date. In fact, we've been one of the first analysts and writers to point them out, as well as just about the only one to offer some remedies, including format tweaking, operations fixes, and suggested marketing and merchandising ideas and perspectives.
We suggest you read Mr. Hirsch's full article in today's LA Times Business Section. Particularly, we think the interviews with Fresh & Easy store customers provide some excellent qualitative data and information.
We point-up the differences in our sales estimate numbers, compared to the others, as we want our readers to have that information as they read the Times' piece and others. The fact is though that our sales estimate numbers, Piper Jaffray's, Mr. Prevor's and those of Willard-Bishop Consulting (quoted in the Times' article using weekly sales estimates of $60,000 -to- $70,000) are now all very close together.
Read the full LA Times article, "Fresh & Easy a tough sell for shoppers," here.
Posted by Fresh & Easy Buzz at 2:49 PM